Some investors say bitcoin can be hard to value: it doesn’t create cashflows like stocks and bonds. But every single piece of bitcoin information is stored on the public blockchain as “on-chain” data. You can use on-chain data models to follow the money and figure out when bitcoin is a bargain. In this guide, we’ll look at how the MVRV Z-Score model does this, and see how well it’s predicted bitcoin’s major tops and bottoms.

MVRV stands for “market value to realized value.” So what do these two values mean? The market value tells us about the market’s current feeling towards bitcoin. But sentiment isn’t the same as spend: the realized value is a measure of actual spending on each bitcoin.

The market value is the total value of all the coins that have already been mined. You get that by multiplying the number of coins in circulation by the current bitcoin price.

So far, around 19 million bitcoins have been mined and the current bitcoin price is $20,000. Multiplying those two numbers together puts bitcoin’s current market value at about $380 billion. This number moves around quite a bit, but you can always check the up-to-date market value of bitcoin on CoinMarketCap.com.

The realized value is the sum of the latest selling price of every bitcoin in circulation. You get that by adding up the most recent sale price for every bitcoin already mined – that is, what each coin sold for the last time it moved to a different wallet address.

Keep in mind, the realized value is only an estimation of the selling price – as sometimes bitcoin can be moved to a different wallet address without actually being sold. For example, you might move bitcoin from a crypto exchange to your own cold wallet. Still, you can think of the realized value as a more practical measure that reflects real spend – it strips out the emotional, short-term sentiment of the market value.

2. How the value comparison works 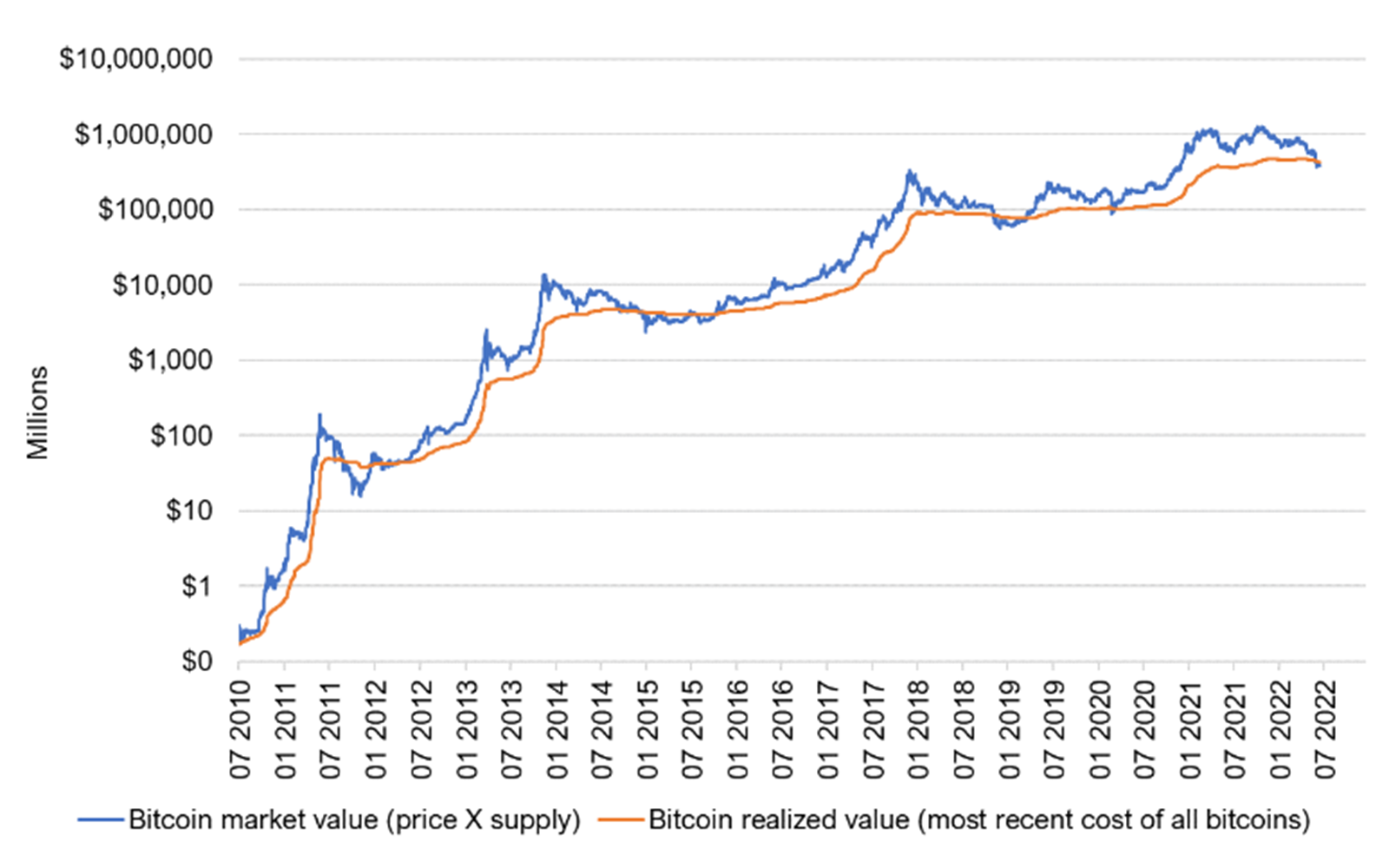 3. 😎 You can be alternative too

But no longer: you can reap the benefits of twelve alternative asset classes by investing in just one Hedonova fund – and you can get started with just $5,000.

So now that you know the difference between the two values, let’s look at the MVRV Z-Score. The “Z-score” part is what turns this into a handy chart that can help you decide if bitcoin is trading at a bargain price.

The chart below shows the MVRV Z-Score (in orange) and the bitcoin price (in dark gray). When the Z-Score drops below zero and enters the green box, it suggests bitcoin is trading far below its fair value and could be a good buy. When the Z-score gets above seven it enters the red box. At that point, it suggests bitcoin is in a speculative bubble – in other words, it could be a good time to sell. 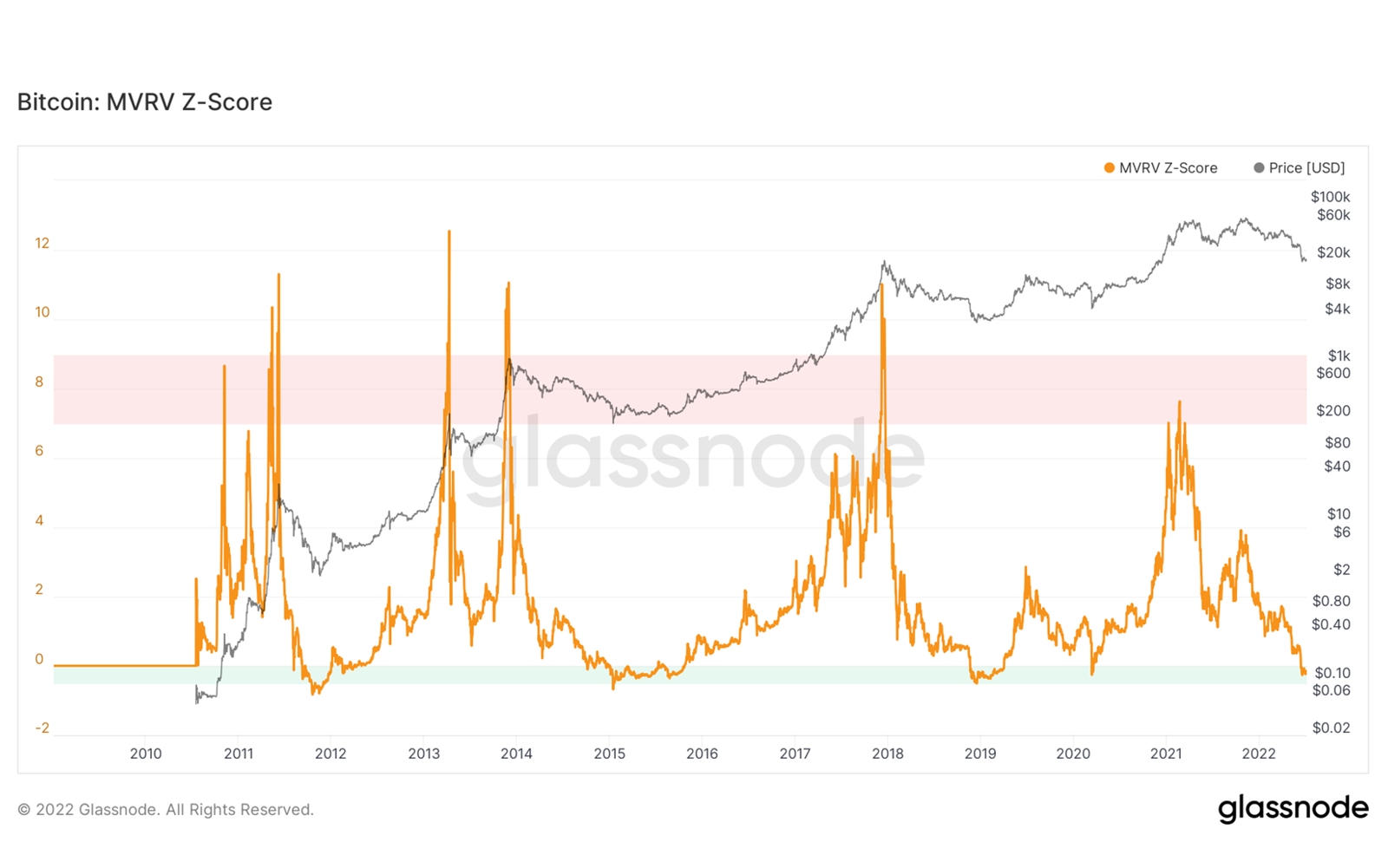 If you followed the Z-score model and bought bitcoin when it was in the green box, you’d have done very well. You’d have bought into bitcoin near the bottom of the 2015 and 2018 bear markets, and near the low of the Covid crash in 2020.

On the flip side, selling when the Z-Score got into the red box (above 7) would’ve helped you lock in those gains. You might not have always sold at the very top, but you’d have been pretty close.

The MVRV Z-Score is below zero right now: the current market value is below the realized value. Sure, history might not repeat itself this time around. But according to the model, buying bitcoin now would be a bargain in the long-run.

5. What are some other on-chain models?

So that’s the Z-score – but there are a range of other on-chain methods to value bitcoin, including:

Discover more from our community

All about investing in wine, with Hedonova

Get the Finimize app

Get started with one email a day